HISTORY OF THE ALAPAHA BLUE-BLOOD BULLDOG

The Alapaha Blue-Blood Bulldog’s origin is somewhat undocumented and unverifiable before 1979. Authorities differ so completely about the origin of the Alapaha that the name itself is in dispute. However, the Alapaha is one of the few breeds that are emblematic of this storied Nation and there is little doubt that a species resembling the Alapaha has existed for over two hundred years in the southern enclaves.

The Alapaha is believed to have its origin in a recently extinct species known as the Mountain Bulldog, Old Southern White and Old Country (Big) Bulldog. These dogs were first brought to America in the early 18th century. It, unlike its “English” counterpart, was continuously bred for utility and stamina, whether it be guard work, farm work, or as a family companion. Despite their proven worth in many areas and ability to reproduce type with reliability these strains of bulldogs survived mainly in small pockets of the south, never being accepted into the show dog circles.

These Bulldogs were extensively used in the development of many breeds like the American Pit Bull Terrier (APBT), Black Mouth Cur and Catahoula Leopard Dog. It would be ignorant of Alapaha and American Bulldog breeders to think only the Catahoula and Pit Bull breeders used the cross breeds they developed in their breeding programs. Remember, being mostly a European dog the original bulldog was acclimated to a much cooler climate than the rural southern United States. Because of this inherent lack of tolerance to heat, most stockmen and hunters found that the cur-type/bulldog crosses made for a better all around dog. These cur-type dogs are mostly believed to be results of crosses themselves between Spanish Mastiff-type War Dogs, Greyhounds, Beauceron, Danish Hounds (the Great Dane) and the generic-type Indian curs (the Catahoula red-wolf hybrid) that roamed the American south. The southern United States was sparsely populated with these cur-type/bulldog crosses that were used by local farmers, ranchers and hunters. Wild cattle, feral hogs, bear and coons were among their quarry. In short, a varied ancestry befits this multi-faceted working dog.

This established strain of dog has resulted from the generations old breeding programs of several people namely Papa Buck Lane and William Chester of Georgia and Cecil Evans and Kenny Houston of Florida. The breed has been known by a series of names such as Otto, Cowdog, Silver Dollar, and Catahoula Bulldog. This type of dog was in danger of extinction until a small group of Southerners in 1979 in an attempt to rescue the Ol’ Tymey Plantation Bulldog of the South founded the Alapaha Blue-Blood Bulldog Association® giving it the aforementioned name and dedicating them to preserving this exceptional type of dog. They set about to perpetuate the breed and to establish a standard in which to breed from.

Even though the Alapaha’s job is harsh and their lives are sometimes shortened by performing their duties, they remain extremely loving and loyal family pets. They really love children and are sensitive to their owner’s demands. They are affectionate and loyal, and they thrive best when treated as members of the family. The Alapaha is a very confident dog and has no fear of people. They are very easy to train. If socialized and raised properly they will be very protective of their home and master.

Unfortunately, the Alapaha has fallen into the hands of those who thought they could use a shortcut to creating an “Exotic Breed”. A variety of different breeds were used to give the Alapaha a certain ‘color’, little did they know that these qualities were already running in the genetic make up of the Alapaha. Recently introduced breeds were, for example, “Blue-merle” Catahoula Cur Dog mixes, “Blue” Amstaffs, “Harlequin” Great Danes and contemporary American Bulldogs. This is very evident when you observe the overall conformation and inconsistencies in temperament of the dogs registered with the open registries (Create-A-Breed Registries like the ARF, ACA, NKC, CKC, IOEBA, OREBA, URBA, FIC, DRA and WWKC). Great damage has been done to the Alapaha as a breed with this influx of cross breeding. These mixed bred curs have maligned the overall idea (to the unknowing general public) in conformation and temperament. The Alapaha was never intended to be a “Blue-Eyed High Belly, Birddog Looking, Beefed up Terrier”.

Today, the Alapaha is not only bred in the Southern enclaves of the United States but all over the world from South Africa to the Philippines from China to New Zealand as well as Europe and the Americas strictly following standards set by the Alapaha Blue-Blood Bulldog Association® (ABBA). The Alapaha found in these countries all originate from the southeastern United States. Breeders who breed purely for the love of breed, not the love of money, who follow the same main breeding criteria, being: #1 Health, #2 Temperament and #3 Conformation.
Early Bulldog Men and Bloodlines

The pre-registration strain of Alapaha, like the pre-1970’s American Bulldog were mostly descendants of the Southeastern Mountainous stock dog. As for as the Alapaha is concerned its Otto foundation was permeated by a handful of breeders like Papa Buck Lane, Alas Kittles, J. M. Cel Ashley, Louis Hedgewood, Walter Nations and David Clark. This type of dog was little known to the general public. Its primary use was as a stock dog or varmint eradicator. The Mountain stockman didn’t tolerate cowardly, shy, or noise-sensitive dogs; physical soundness was a prerequisite in this bulldog. To this day this type dog persists in its purest state of usage in the more isolated enclaves of the rural south, where the mountaineers even today don’t lock their doors or pen their livestock.

William Chester was another one of the early pioneers of the pre-registration Alapaha Blue-Blood Bulldogs. Although never numerically large, his breeding program had the deepest impact on the foundation of the Alapaha. The infamous Chester’s Black Jack an outstanding 82 pound bulldog (sire: BINGO × dam: Missy) named after Bill’s favorite card game, laid the biggest contribution to the Alapaha’s foundation. The dogs sired by “Jack” that figured prominently in the Alapaha were, Chester’s BOSS, Blue Boy Lane (sire of Lana’s Marcelle) and Waldron’s Samantha. Mr. Chester being an Ol’ Pit-Bull Man himself believed in game testing his dogs on live-stock vigorously. Though his dogs were often man-aggressive this was a quality he didn’t personally care for. The Silver Dollar concoction (Catahoula × Catch-weight APBT × Mountain Bulldog) was deadly.

Cecil Evans was a rugged Cracker Cowboy down from traditional ranch families that bred and trained catch/herding dogs in Merritt Island, Florida. In the late 1940’s after several failed attempts at creating the “Ultimate” working stock dog he realized that the local bulldog blood (namely the now extinct Ol’ Southern White) he was using was too watered down (compared to their English counterpart) by the apparent previous cross breeding it had endured since being brought over by the settlers. His breeding program needed some more potent bulldog blood to produce the endurable working catch dog he was looking for. Mr. Evans set out to find a line of bulldogs known for maintaining its original bull baiting power and tenacity; something he felt the local bulldog strains were lacking and didn’t produce in their progeny when crossed with his cattle coursing cur dogs. He came upon an article detailing the breeding practices of a Mr. Clifford Derwent of London, England, who was trying to preserve in his bulldogs the true-grit qualities of the Blood Sport era. After acquiring a few of Mr. Derwent’s bulldogs Mr. Evans along with his brother-in-law Bob Williams developed what we know today as the Cowdog strain, a working English Bulldog coursing Cur cross. My. Granddaddy used to say that “unless one got a crank tail in a litter, there were no good heads amongst the puppies”, and to some extent he was correct. Any time a bull or cow would attempt to escape a herd, the Cowdogs were trained to scamper alongside it barking and nipping until it turns back or it would catch and hold the wild cattle until the cowboys responded with a signal. This Cowdog became as important to the local cattlemen as their mount, whips and tin coffee cups which hung from a string on their horse’s saddle.

Kenny Houston was the owner of a Big Game Hunting outfit outside of Marianna, Florida. He also bred a strain of catch dogs for his business interest. His strain was primarily down from Ol’ Southern Whites crossed with Catahoula Leopard Dogs. He liked large athletic dogs in the 90 to 100 lbs range because of their ability to run with big game and maintain enough strength to handle themselves once the prey was bayed. Houston’s most famous dog was Blue Muskee (sire: DUDE × dam: Silver). Blue Muskee sired Miller’s Blue Ox, the unknown sire of Lana’s Sylvia Lane and Quinlan’s Hank and countless other Lana Lou Lane bred dogs. Ms. Lane was always interested in that elusive blue-merle color, in which this dog threw in his progeny time and time again. Mr. Houston got his first dogs and breeding practices from a little known cowboy and sportsman named Howard Carnathan; who in the 1960’s did a lot of early work in developing this type of dog. Mr. Carnathan is said to have liked the intelligence, quickness, endurance and high spirited nature of the Catahoula Leopard Dog but was not satisfied with its sometimes aloofness to people and soft bite. Using some of his Bulldogs he infused a little Catahoula to spice things up. This cross was said to be the perfect fit for what he was looking for saying “I needed a dog that would be a companion and protector to my children and home yet I also was in need of a dog hat would help with the farming duties. The Catahoula Bulldog fit my purpose exactly”. Many breeders since have made unsuccessful attempts to replicate this practices over the years.

It was this type working stock dog used in the pre-registration Alapaha Blue-Blood Bulldog, such as ‘Houston’s Smokey’ – See pedigree of CRK’s Brangus Bull. 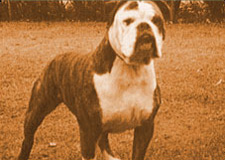 Geronimo
The infamous “GERONIMO” an old-type bulldog bred by Mr. Clifford Derwent. This dog was used in the pre-registration Alapaha Blue-Blood Bulldog (Cowdog strain), in 1952.

We are currently updating the website. Pending orders are still being processed. No new orders will be processed until Jan 2, 2022. If you have an existing order you will receive papers via email before the Nrew year Arrives. Dismiss

Change Location
To find awesome listings near you!